Considering the impacts of migration on the individual, the place left behind by the migrant and the place hosting the migrant

Considers some of the positive and negative aspects of migration 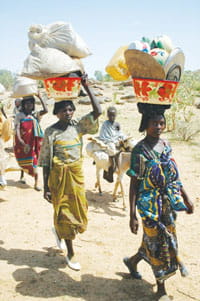 MIGRATION is the movement of people from one place to another. Migration can be international (movement between different countries) or internal (movement within a country, often from rural to urban areas). In this article we consider the impacts of migration on the individual, the place left behind by the migrant and the place hosting the migrant. We also consider the push and pull factors of migration.

More people are migrating today than at any other point in human history. Migrants travel in many different ways and for many different reasons. People move in order to improve their standard of living, to give their children better opportunities, or to escape from poverty, conflict and famine. Today, with modern transportation and communications, more people are motivated and able to move.

PUSH FACTORS These are factors which push people to migrate, such as drought, famine, lack of jobs, over-population, civil war, persecution.

PULL FACTORS These are factors which pull people towards a certain place, such as job opportunities, better education, freedom, family links.


Why do people migrate?

People migrate for many different reasons. These reasons can be economic, social, political or environmental.

The impact on the place left behind by the migrant

The impact on the individual

The impact on the place hosting the migrant

This resource is from Migration – Footsteps 78