A member of Junior Parliament expresses her point of view during a public debate.Photo: Jubilee Centre

In 2015, the Jubilee Centre in Zambia established an initiative called Junior Parliament. This unique forum allows young people to develop their leadership skills, learn how to express their views and gain an understanding of the national parliamentary system.

One young man, Ray Daniel Zulu, says, ‘I joined Junior Parliament because I have a passion to bring change in my community and nation. When wrong things happen and they are not addressed, the people that suffer the most are young people.’

The participants are taught how to research different issues, which they then debate. The debates are held in public, and community members and government officials are invited to attend.

Topics that have been debated include plastic waste, education for vulnerable children and the role of the community in implementing government projects.

There have been several major achievements as a result of these debates: children have received government support to complete secondary school, and there is now a ban on single-use plastic bags in all supermarkets.

Ray says, ‘I have learnt that a leader must take risks in order to grow. We believe that we can make a difference in our communities. We want to involve more young people so we can work together to take our nation forward.’ 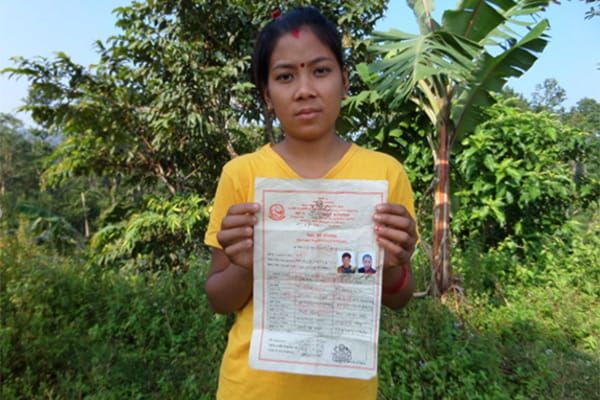 Sangita Praja got married at the age of 16 in Nepal. But the couple did not register their marriage, so they did not get a marriage certificate.

A few years later Sangita’s husband married someone else without her knowing, putting her in a very painful and difficult situation.

Sangita realised that she needed to get a marriage certificate so she could claim her right to government support.

The women’s group in Sangita’s community had received advocacy training from local organisation ETSC (Education, Training and Service for Community), and they offered to help Sangita present her case to the ward chairperson.

After various negotiations, during which Sangita gained the confidence to speak up for herself, she received her certificate.

This resource is from Community-led advocacy - Footsteps 118