Food security exists when people have enough basic food at all times to provide them with energy and nutrients for fully productive lives. When poor people are asked what their highest priority is for themselves and their family, very often their answer is food. The first Millennium Development Goal (MDG) is ‘to eradicate extreme poverty and hunger’. This goal is essential for achieving the other seven MDGs.

Progress has been made in improving food security at the global level. However, the situation is still severe in some countries, especially in sub-Saharan Africa and South Asia. While poverty is the main cause of food insecurity across the world, there are particular issues that make poor people even more vulnerable. These include:

The concept of food security can be divided into four main areas:

Governments and development organisations that want to improve food security must consider activities in all of these areas.

It is essential that people have enough food available for their survival. Often there is not enough land available to provide food for local people. This is partly because land is being used to benefit people in countries of the North, such as being used to grow food, animal feed or biofuels. Where there is not enough food available, food needs to be imported. In very difficult situations people rely on food aid.

Sometimes people do not have access to food even when it is available at national level. This is a particular issue for poor households without access to land. There are two important aspects of access to food:

QUALITY AND NUTRITIONAL VALUE OF FOOD

Food needs to be safe to eat and of good nutritional quality. Good nutrition is important for growth and health. If someone has access to enough good food, clean water, sanitation and health care, their body’s basic needs will be met.

Good nutrition is especially important for children, yet hunger and malnutrition kill millions of them every year. In such situations child feeding programmes and targeted food distributions are an important part of any response.

STABILITY IN PROVISION OF FOOD

Households and individuals must have access to food at all times, either fresh or stored food. However, sometimes there are situations that can affect this. These can be:

There are some important issues that affect the achievement of the four pillars.

Many organisations now include an individual’s right to food as part of their advocacy for good governance. This might include:

There is a close relationship between HIV and food security. People living with HIV should eat food of high nutritional value in order to stay healthy. Good nutrition is also vital for people taking antiretroviral medication. Even if food is available within a household affected by HIV, there can be malnutrition. This is because illnesses related to HIV can reduce appetite and the body’s ability to absorb nutrients.

As HIV tends to affect productive adults it has a huge impact on food security. This can be due to:

People living with HIV should be encouraged to plant crops that are less physically demanding, such as fruit trees, in preparation for when their illness becomes worse.

In many areas of the world there is slow growth, or even steps backwards, in agriculture. In many countries although most people are farmers, they are unable to produce enough food to feed the whole population. This means that some countries have to import food or rely on food aid.

In many countries, hunger and malnutrition are greater in rural areas than in urban areas, even though most people live in rural areas and make their living from agriculture. Numerous studies in sub- Saharan Africa have found that growth in the agricultural sector has a much greater impact on reducing poverty and hunger than urban and industrial growth. Increasing and diversifying agricultural productivity is therefore very important in addressing the food insecurity challenge. One area which needs to be improved is irrigation. Nearly half of the world’s food is grown using irrigation techniques, but these techniques are currently very inefficient.

As part of improving agricultural productivity, environmental issues need to be addressed. Although people in rural areas have conserved much of the rural environment over many years, increasing hunger and population pressures have driven them to carry out some agricultural practices that are damaging the environment. Climate change is increasing the likelihood of crop failures and food insecurity.

GENDER EQUALITY AND EMPOWERMENT OF WOMEN

Women are often primarily responsible for household food security. In many countries women contribute most of the labour in food production. Women are also responsible for the majority of the food processing and preparation. They ensure that children and all other members of their households are fed and nourished.

Yet women rarely receive as much agricultural support as men, such as loans and agricultural extension services. This means that they do not produce as much food as they could for their families.

Governments and organisations must consider gender issues related to food security if progress is to be made.

Dr Ruvimbo Mabeza-Chimedza is an independent consultant. She specialises in food security and livelihoods. 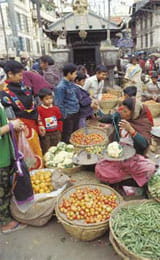 This resource is from Food security – Footsteps 77