How I use Footsteps

Tarsis Hurmali, Director of the development organisation Yayasan Ayo Indonesia, has been receiving Footsteps for more than six years. We had the privilege of interviewing Tarsis about the way he uses Footsteps.

From: Impact and change – Footsteps 100

How positive change happens and how best to measure it 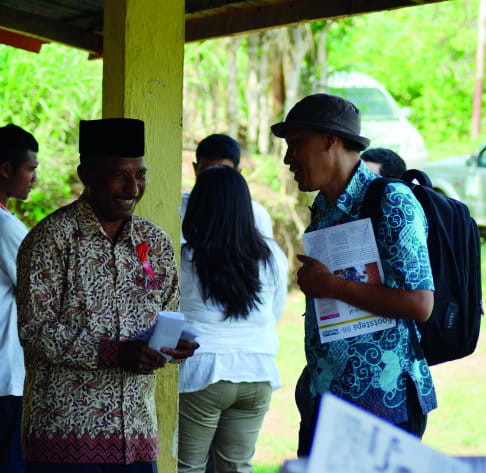 Tarsis (on the right) with his copy of Footsteps 98. Photo: Ayo Indonesia

Tarsis Hurmali, Director of the development organisation Yayasan Ayo Indonesia, has been receiving Footsteps for more than six years. We had the privilege of interviewing Tarsis about the way he uses Footsteps.

Please tell our readers about your organisation and the work you do.

We are a local NGO based in Ruteng, Flores, Indonesia. We focus on rural development issues, including organic farming and basic health care.

We are interested in how farmers can boost their income. As well as improving families’ diets by introducing varied vegetables, we also encourage our farmers to meet the local demand for vegetables. We encourage them to join local savings groups, where they can get low-interest loans.

We also run projects to help people living with disabilities, especially children. Where our resources allow, we build access roads to remote villages, and provide drinking water supplies. Recently we have been looking into coffee production, as it shows huge potential for local development.

How do you use Footsteps in your work?

I am interested in whether the topics we are working on are also of interest to other farmers around the world. This is always confirmed positively by Footsteps. It is very encouraging to see how things are worked out in different parts of the world.

I learn a lot and get inspired by the main topics and smaller articles. As only a few of us are able to read English, sometimes I explain the content of one or two issues to friends during tea breaks. I remember the one about savings and loans schemes [Footsteps 80: Micro-enterprise]. I explained to our friends here that if it works well in other parts of the world, it must also work here. And now we successfully support Credit Union Ayo Mandiri as one of the sister organisations of our NGO.

We have also translated certain articles or adjusted them to our local situation. I remember one was about human trafficking, one was about HIV and another was about pregnancy.

I was educated as a teacher of religion. Many of our beneficiaries are Christians, and I speak with them like a priest would. Some of the biblical quotes in Footsteps have really helped. In several Credit Union meetings this year, I explained that savings and loans schemes actually follow biblical principles: people help one another. The audience seemed impressed with this.

How do you go about translating Footsteps?

We think that Footsteps comes in simple and easy English, and the content is also explained in a simple way. My secretary and I do the translation.

Are there any Footsteps editions or articles that have been particularly helpful?

We used the information about human trafficking quite widely. Most of the audiences who are living in remote areas said it was the first time they had heard this information. The knowledge was very important because many young people have left their homes and travelled to Malaysia to become migrant workers. Cases of ‘missing persons’ have also occurred several times.

You used Footsteps 98 as part of a conference on HIV in December 2015. What sort of impact did this have?

This issue of Footsteps arrived at my desk while we were preparing for a small celebration for World AIDS Day (1 December) at a remote parish in Mukun.

I was particularly happy to read about the progress that is being made in combating HIV and AIDS. It is so good to know that, with the right treatment, people living with HIV can live a longer life. The message gives us great hope that the world will gradually overcome this condition.

I wanted to make sure that the stories shared during the celebration were not all about a hopeless end, as people were told in previous years. No, some of the stories are indeed hopeful!

We translated the article on ‘HIV: myths and facts’ into Indonesian, and distributed this leaflet to many people at the celebration. The conference improved people’s knowledge about HIV. A lady living with HIV shared accurate information with hundreds of participants. Some of these were young students.

Do you have any other comments about Footsteps?

The way Footsteps explains something is very interesting for us. It is always simple but very clear. We would like to thank you for this amazing magazine, and God bless your great work.

With thanks to Tarsis Hurmali.

This resource is from Impact and change – Footsteps 100