What is Human Trafficking?

Human trafficking is the transporting or abduction of people for the purposes of exploitation, using coercion, fraud or deception

Real-life examples of the lies traffickers tell and action to prevent trafficking.

On 30 July 2014, the United Nations held the first World Day Against Trafficking in Persons, to raise awareness of a crime which affects millions of vulnerable communities across the world. Human trafficking is the transporting or abduction of people for the purposes of exploitation, using coercion, fraud or deception.

Trafficking happens in nearly every country in the world. Most victims are trafficked close to home, within their country or region of origin, and their exploiters are often fellow citizens. The types of exploitation may vary but in general more women are affected than men.

Victims of human trafficking do not agree to being exploited, although at first they may agree to go with traffickers based on lies which they are told. However they are then held against their will and are exploited. Traffickers make money from their victims through this exploitation. This could be by forcing victims to work without pay, making them work in prostitution or selling their organs for profit.

Trafficking is related to other illegal practices such as people smuggling, which is when people who want to migrate illegally to another country pay a smuggler to transport them across international borders. When they arrive they are not held against their will but do remain in the new country illegally, lacking legal documents. As with trafficking this makes them vulnerable to exploitation, but if they have gone voluntarily and are free to leave the smugglers when they arrive at their destination, this is not considered to be trafficking.

In 2005, the International Labour Organization (ILO) estimated that the human trafficking industry was worth 32 billion US dollars a year and it is likely to have risen since then. This is the same amount of money as the total Gross Domestic Product (GDP) of Tanzania.

Ninety per cent of countries have laws that make human trafficking illegal. However, often these laws are not put into practice. The number of people who are convicted is very low. Forty per cent of countries surveyed by the UN in their recent report on human trafficking had fewer than 10 convictions per year. Corruption, violence and fear contribute to this injustice.

Poverty makes people vulnerable to human trafficking. A lack of education and understanding of safe migration makes it harder for people to recognise the lies which traffickers tell. A lack of stable income causes people to seek opportunities elsewhere, even if there are great risks involved. Natural disasters and wars break families and networks that would usually protect people from traffickers.

Ending human trafficking will need communities, churches, local organisations and governments to work together to address the poverty and injustice issues which are at the root of this growing global problem.

The United Nations Office of Drugs and Crime (UNODC) publishes their Global Report on Trafficking in Persons every two years. The latest report, published in November 2014, is full of useful statistics and analysis and can be downloaded free of charge from their website (www.unodc.org).

Data on human trafficking is challenging to collect because victims are often hidden from researchers. The statistics below are from the UNODC 2014 Global Report on Trafficking in Persons. They show us that about half of all detected cases of human trafficking are related to sexual exploitation, nearly half of the victims are women and that a third of cases are trafficked within national borders. The UNODC data is gathered from statistics collected by national governments. Some regions are not able to provide reliable data and this affects the overall global statistics presented in charts below. 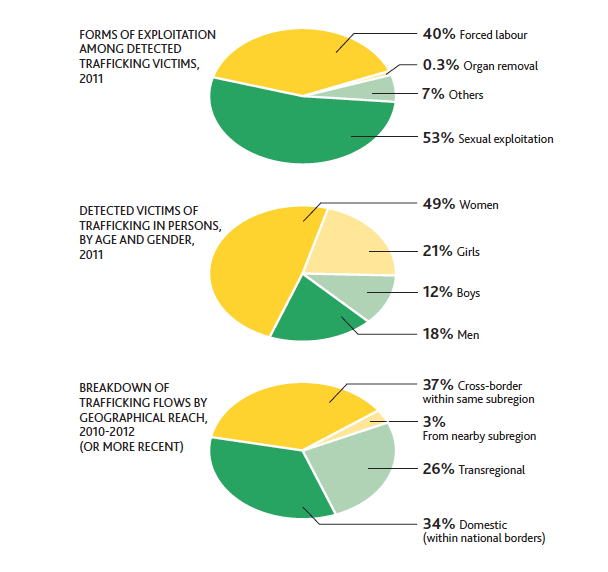