In Nepal, street drama and dance are used to encourage discussion about many different issues. Photo: Lloyd Kinsley/Tearfund

Theatre – including drama, mime, song and dance – can be a powerful way to tell stories, share information and encourage discussion. The impact is often particularly significant when people do not just watch a story unfold, but take part in it themselves.

Theatre is able to:

Many sensitive issues, which may be too delicate or dangerous to discuss openly, can be explored through the use of theatre. Playing the role of a different character allows people to say things that would not be possible in their own voices. Humour can sometimes help to tackle difficult or sensitive issues in ways that do not cause offence.

In Laos, for example, young people are using drama to share messages about human trafficking, drugs and HIV. In the process they have gained the respect of their elders, and the youth group now has a seat at the village planning meetings. This is a breakthrough in a culture where age and social hierarchy are highly valued.

Theatre can be used to draw people’s attention to community issues that they may be able to help with. A few years ago in Mali, village actors put on a play showing a family talking to the chief and telling him about their desperate need for a new water source. As a result, the actual chief agreed to let the community work with a local NGO to address their need.

Theatre can be used as therapy to help people overcome mental health problems such as trauma. In Haiti, earthquake survivors were invited to take part in role play (acting out the part of a character in a spontaneous, unscripted way) to help them process the trauma they had experienced. Writing and performing songs can also help people to express their feelings. This use of theatre usually requires special training and understanding.

A play can provide several alternative endings, rather than just one. This encourages people to think through the alternatives and consider how they, personally, would respond.

To help the audience engage with an issue they can be asked questions during or after a drama such as ‘What would you like to happen next?’, or ‘Why do you think the character responded in that way?’ They can also be invited to join in the performance as extra members of the cast.

Adapted from an article by Tim Prentki and Claire Lacey that first appeared in Footsteps 58 – Theatre for development. 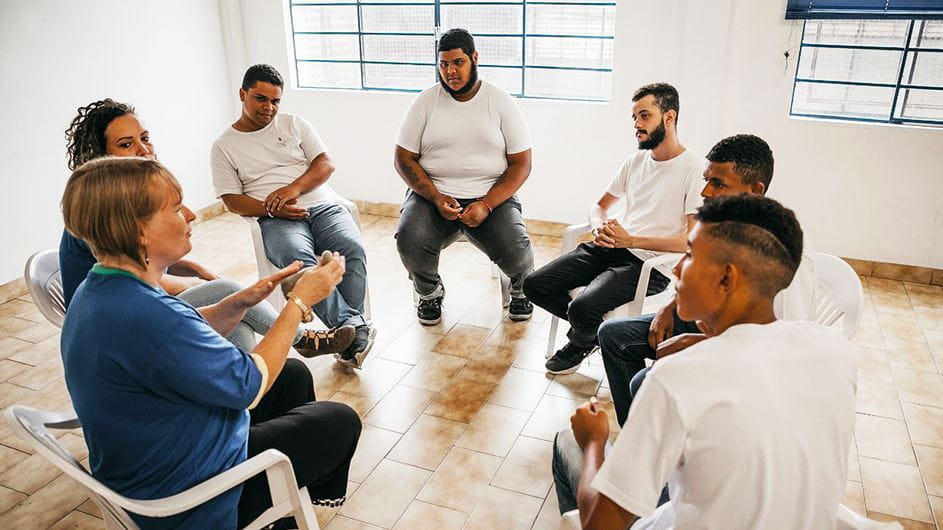 Alexandre was on his motorbike, sitting at a traffic light and waiting for it to change. Suddenly two teenage boys ran up to him, pretended to point guns at his head and shouted at him to get off the bike.

‘FREEZE!’ I said, followed by, ‘Alexandre, what are you thinking right now, how are you feeling?’

I was in the youth prison in São Paulo, Brazil, working with boys and young men who had committed serious crimes. Many of them had been arrested several times, including Alexandre.

I was encouraging the boys to use role play to act out scenes in their lives, and on this occasion Alexandre was playing the role of someone he had robbed.

When I asked Alexandre how he was feeling, he turned to the boys who were pretending to rob him and shouted, ‘No, you cannot steal my motorbike! This is my motorbike. I bought it with my own money and I need it to go to work.’

This was a turning point for Alexandre. He suddenly realised that he did not want to steal things and frighten people anymore.

In the prisons we use psychodrama – a form of group psychotherapy – to help the boys move forward in their lives. As they act out and discuss different situations, they begin to understand how their behaviour affects the people around them.

Today, Alexandre runs his own barber shop and has started teaching his hairdressing skills to others. He sometimes visits the prison with me and shares his story, encouraging the boys to join the psychodrama sessions and gain the insights they need to choose a new direction.

Cally Magalhães is a theatre practitioner, and Director of the Eagle Project in Brazil. She has written an autobiography called Dancing with Thieves.