A refugee is a person who moves away from their own country because they feel unsafe there due to race, religion, political opinion or being a member of a particular social group

Considers some of the positive and negative aspects of migration

A refugee is a person who moves away from their own country because they feel unsafe there due to race, religion, political opinion or being a member of a particular social group. Someone who wants to be recognised as a refugee is an asylum seeker.

When a person arrives in the United Kingdom (UK), looking for asylum, they must register with the government while their legal case is considered. If their case is approved, they are allowed to stay in the UK. If their case is rejected, the government will not provide any more support and they must leave the country. People who are refused asylum may try to find new evidence to reapply. This can take years and during this time it can be almost impossible to find somewhere to stay or any other means of support. 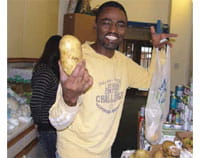 Manchester is a large city in the UK with a population of over 2 million people. There are around 2,000 refused asylum seekers living in the city. The Boaz Trust is a Christian organisation that was set up to meet the needs of people who have been refused asylum in Manchester. It works with local churches, the Red Cross and other groups to provide this support.

One of the main aims of the Boaz Trust is to provide accommodation for refused asylum seekers who have nowhere to live. This is done in one of three ways:

We believe that some of the activities we carry out can be used anywhere in the world, wherever there are people seeking safety.

CARING FOR THE WHOLE PERSON

As an organisation, we seek to work holistically, caring for and serving asylum seekers as whole persons. We are convinced that everyone is created in the image of God (Genesis 1:27). For this reason all people deserve respect and care. In response to the needs expressed by asylum seekers in our community, the Boaz Trust has developed the ‘Meaningful Lives’ project. This involves:

These provide asylum seekers with opportunities to talk, learn and share as they spend time together.

SOMEWHERE TO STAY AND SOMETHING TO EAT

In many places, it might not be possible for asylum seekers to find work due to the law (as in the UK) or discrimination. Perhaps your church could offer:

Some people hold negative views about those who move into an area from other countries. As Christians, we are called to ‘speak up for those who cannot speak up for themselves, for the rights of all who are destitute. Speak up and judge fairly …’ (Proverbs 31:8-9).

Ros Holland is the Office and Communications Manager for the Boaz Trust.

‘I was a cattle herder. In 2003, I was arrested by the police as they thought I was in opposition to the Government. A number of times I was tied to a tree and beaten repeatedly. My village was attacked by the militia. All my friends and my whole family were killed. I ran away and eventually reached a port.

I had some money and an agent put me into a goods container on a boat. After four weeks the container was opened. I was in Liverpool, in England. I could barely move and I was afraid. They took me to the government’s Home Office where I was questioned.

When I went to the asylum court I did not understand anything. Three weeks later I received a letter saying I was refused asylum and that I was to return to my country, because it was safe there. Some people from the government came to the house I was living in, carried me outside and left me on the street.

I slept outside for a week. One day a man gave me the address of the Red Cross and some money so I could catch a bus. There I met staff from the Boaz Trust. They found me a space in one of their houses with other refused asylum seekers from my country. Now I volunteer at the drop-in centre and I also go to college where I am learning English.’

Hamed has recently found a new solicitor and his case is being considered again by the government in the UK. 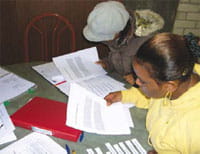 Be a friendly church community!
It is important that Christians show Jesus’ love in everything we do and say, to everyone we meet. Could you open up your church building for a ‘drop in’ once a week? For example, on one day each week one local church provides a simple lunch, second-hand clothes, support and advice to anyone who needs it.

Share food and fellowship
Eating meals together can break down barriers. Could you ask some of the asylum seekers to cook a traditional meal? It is an easy way to learn about other cultures and make friends.

Learn about the situation in your local area.

Where do migrants come from and why? Are there other groups you could work with in the community?

Ask new people in your community how you can support them.

For example, they may want help finding a doctor, using the buses, or opening a bank account.

This resource is from Migration – Footsteps 78