In rural areas, the main water sources are normally groundwater borewells or surface water, rivers and lakes. However, an often overlooked, easily accessible and sustainable source of safe drinking water during the wet season is rain. In tropical and sub-tropical climates the quantity of water collected from rainfall can be substantial.

There are clear advantages to rainwater harvesting at home:

Traditional methods of rainwater harvesting used in Uganda and Sri Lanka include rainwater collection from trees, using banana leaves or stems as temporary gutters. Up to 200 litres may be collected from a large tree in a single storm. 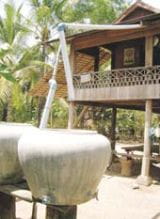 However, in some rural areas most people live in simple thatched roof structures, which are not suitable for traditional rain - water harvesting. Tearfund has therefore researched and tested an innovative and simple ‘ultra low cost’ way of harvesting rainwater without using rooftops. 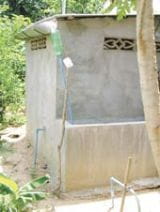 Rainwater harvesting off the roof of a latrine in Cambodia, using an old soft drink bottle, hard plastic pipe, corrugated iron and a brick storage tank. This concept is especially useful as it provides water for hand washing right at the door of the latrine. Photo: Murray Burt/Tearfund

In many populations on the move, especially in emergency and post-emergency situations, plastic sheeting is a basic commodity that many households own. It is either given through distributions at refugee camps or camps for internally displaced persons, or purchased on the local market. Plastic sheets are used for many purposes including as shelter for homes or shops. They can also be used for rainwater harvesting. Calculations based on rainfall data from Colombo, Sri Lanka, show there would be an average daily yield of more than 60 litres over six months of the year from rainwater harvesting using an 8m2 plastic sheet for collection.

Designing your own rainwater harvesting system

Using plastic sheeting is one option for rainwater harvesting without using a roof. Other locally available materials can also be successfully used, such as single corrugated iron sheets and cloth.

There are no rules for construction. Think of new ideas using whatever materials you have available to catch and collect the rainwater. The principle is always the same:

Catch the rainwater on a clean surface before it hits the ground, and channel into a clean collection container.

It is easy to scale up rainwater harvesting systems. In emergency situations, rain­water harvesting can be made available to all and can even contribute as a significant water source in large communities and camps. Remember to promote good hygiene at the same time, making sure that each part of the system is clean. Cover the water container and make sure the stored water is not removed by dipping hands or scooping using dirty cups or other dirty items. Rainwater which has been stored for a long period may require disinfection. Protect water containers with a screen to stop mosquitoes breeding and keep out sunlight to prevent the growth of algae.

Plastic sheeting, together with other locally available materials, was used to catch rainwater and channel it into suitable collection containers. All the materials used were available locally, including storage containers, which in many cases were locally-made clay pots.

Several designs were tested. The most successful design involved simply tying a plastic sheet at its corners to four poles buried in the ground. Water was then channelled into collection con­tainers, positioned either at the edge of the sheet, or under a hole at the centre of the sheet (see picture on opposite page). Women, men and children took part in designing new methods. Children, who often bear the burden of water collection, came up with some of the most innovative methods, which were then tested.

During testing, an 8m2 plastic sheet collected 70 litres of water during a 30-minute period of rain. Based on average monthly rainfall for Juba, the nearest major town in South Sudan, the average amount of rainfall that could be harvested from an 8m2 plastic sheet would be 30 litres per day during the six months of the wet season. This would provide enough drinking water for a family of six during the wet season, based on 5 litres each per day.

One environmental challenge was strong winds which often occur before rainfall. The winds sometimes made the lightweight plastic sheet structures unstable. As a result, some changes were made to strengthen the structures. For example, each edge of the plastic sheet was attached to timber poles, which were attached at an angle to the vertical poles in the ground.

Following the demonstrations, many community members constructed similar systems at their homes. This meant that a high proportion of the community was collecting rainwater as a primary water source during the wet season. Following training, some members volunteered to spread knowledge about rainwater harvesting to neighbouring communities.

What is a first flush diverter?

Contaminants (eg dirt, insects) from a roof are usually concentrated in the first few minutes of flow off the roof. After this runoff has passed and washed the roof, the water is much cleaner. A ‘first flush diverter’ simply diverts the ‘first flush’ of contaminated water away from the container, and then allows the rest of the rainwater to be directed into the container. (See diagram.)

If you cannot find a ball and a reducer pipe, you can just use a downpipe, which removes the larger dirt but not floating items like leaves. Cover the top of the downpipe with mesh to catch items like leaves and ensure the mesh is cleared regularly.

‘We are coming out of war … we are happy to learn how to harvest water … we are open to new ideas.’ (Marc Tuc, 60 years)

‘I tasted the water at the church. It was good – it is the kind of water that does not make one sick.’ (Nyibol Ngor, 17 years)

‘The community is happy about rainwater harvesting as they now will have more water to use, especially during the dry season.’ (Daniel Aleu, 25 years)

This resource is from Natural resources – Footsteps 82