Violence takes many forms in conflict situations. One area which is often difficult to talk about openly is sexual violence.

From: Conflict and peace – Footsteps 92 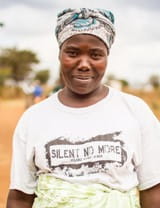 Violence takes many forms in conflict situations. One area which is often difficult to talk about openly is sexual violence. Yet across the world, thousands of people, mostly women and children but also men and boys, suffer attacks which leave deep scars, both physically and psychologically.

Sexual violence brings with it physical injury, humiliation and psychological trauma. It tears families and communities apart. It can result in unwanted pregnancy, long-term disability, sexually transmitted diseases and even death.

Rape, and other forms of sexual violence, are about an abuse of power and control over people who are more vulnerable. Society may blame survivors of sexual violence, but they are not responsible. Yet the majority of survivors never receive justice and face challenges in accessing medical, psychological and economic support. Further violence can be prevented by protecting the most vulnerable people in society. Communities can also support survivors as they try and access justice and as they receive medical support. Incidents of sexual violence can be reported at police stations (especially if there is a ‘gender desk’) or United Nations agencies with Gender Based Violence focal points.

Gender inequality is both a cause and a consequence of violence against women. When we treat someone else as different from us, as the ‘other’, and of less value than we are, it can fuel conflict and violence. But the Bible teaches us that both men and women are made in the image of God, entrusted by him to be jointly responsible to rule over his creation (Genesis 1: 27-28). We need to go back to God’s original plan and restore relationships between men and women to how God originally intended them to be.

Changing attitudes to sexual violence takes a long time but the church has a key role to play in this process. Bible studies, sermons and teaching materials can change people’s attitudes to both victims and perpetrators. Churches which care for, support and listen to victims are needed. In partnership with others, they can help to provide medical, psychological or financial aid to survivors.

The church can also speak out at all levels, local and national, to bring the issue into the light. If church leaders are courageous in talking about sexual violence, they will influence those within and outside of the Christian community.

Churches have not always been places which have been welcoming to survivors of sexual violence and have sometimes reinforced the shame which victims often feel. Where this is the case, repentance and forgiveness will be needed.

With thanks to Aneeta Williams, Amanda Marshall and Sarah Reilly.

In eastern Democratic Republic of Congo (DRC), the Baptist Community in the Centre of Africa (CBCA) has taken the issue of sexual violence very seriously, particularly that targeting children. The church has mobilised its members and the teachers, pupils and parents of its church schools to become key players in the fight against sexual violence.

CBCA organised a five-day training workshop for 40 of its education staff. Materials developed by South Africa’s Tamar campaign on violence were used to enable discussion of a shocking story of rape in the Bible (2 Samuel 13). This enabled participants to reflect on the silencing of women who have been raped, cultural issues around rape within communities and the difficulty of bringing justice.

In response, participants decided that the greatest need was to challenge the current understanding of church members concerning sexual violence. They wrote a declaration calling for those in authority in church and government to speak out about sexual violence and to develop policies to address the issue in schools. Within weeks of the workshop, words were turned into action. CBCA’s Bishop announced the formation of a high-level group to address issues of sexual violence targeting church schools. In many areas, teachers benefited from workshops and training concerning life-skills and education about sexual violence.

Adapted from Silent No More, a Tearfund report (2011), available to download from: www.tearfund.org/tilz/silentnomore

This resource is from Conflict and peace – Footsteps 92