Different ways to safely store and preserve food, making the most of the food we have and reducing waste 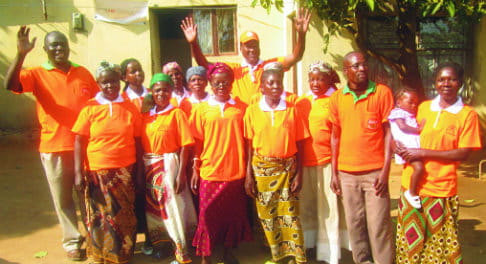 Vitamin A is a very important micro-nutrient which we all need to be healthy. Vitamin A deficiency is common in many parts of Sub-Saharan Africa and South Asia because of high rates of malnutrition.

Pregnant and breastfeeding women require more vitamin A so that they can meet the needs of their own bodies as well as those of the unborn child or breastfed baby. If they do not get enough vitamin A they can suffer from night blindness, have miscarriages, their babies can arrive early and they are more likely to die during pregnancy.

Children who do not have enough vitamin A do not develop and grow in a healthy way. They have a greater risk of infection and a lower ability to fight infection. They may also have eye problems. Severe vitamin A deficiency can even lead to death.

Our project decided to focus on the promotion of the orange-fleshed sweet potato (OFSP) to help people in Mozambique to make sure that they have enough vitamin A in their diets. This kind of sweet potato is tasty, easy to cook and rich in vitamin A.

The first stage was to build our capacity to lead the OFSP project in Manica Province. Personnel from the two organisations involved in the project (Shingirirai and PORENet) received training on OFSP production from the International Potato Center in the capital, Maputo.

The next phase was to demonstrate the production of OFSP to the public. We planted OFSP in plots where people could visit and see it for themselves. We also used the plots to train ourselves to grow the crop well, as well as to grow potato vines that we could give to others who wanted to start their own plots.

The next phase involved raising awareness and creating demand for OFSP through demonstrations and sharing information about the benefits of eating OFSP. We cooked different varieties for participants; they tasted each variety and chose their favourite. We kept the names of the varieties a secret so we could find out which variety would really be the most popular.

We also used other creative ways to engage people. We made and distributed orange t-shirts to people with the slogan ‘Consume OFSP for better health and more vitamin A’ printed on them. We even had a dance which we performed to tell people about OFSP!

Change at a higher level

We lobbied for OFSP to be included in the ‘Provincial Multi-sectoral Action Plan for the Reduction of Chronic Malnutrition’ (PAMRDC 2013–2017) so that everyone in Mozambique could benefit from this vegetable. This meant meeting with many different people including representatives from all levels of the government (district and provincial), farmers’ groups, churches, schools and the provincial governor. But it was worth the work because finally a draft was approved by the provincial governor for onward transmission to the central government and OFSP was included in the Plan.

Making the most of OFSP

OFSP mixes very well as an ingredient in traditional recipes, as well as in more processed products. You can be creative and try it steamed, boiled, mashed, fried, roasted, baked or use it to make products for weaning or as preserves. OFSP products can provide those who buy them with a varied diet and at the same time generate income for the producers. Growing OFSP can also help empower women, enabling them to give their families food that will keep them healthy, and providing them with a new source of money for their other needs. 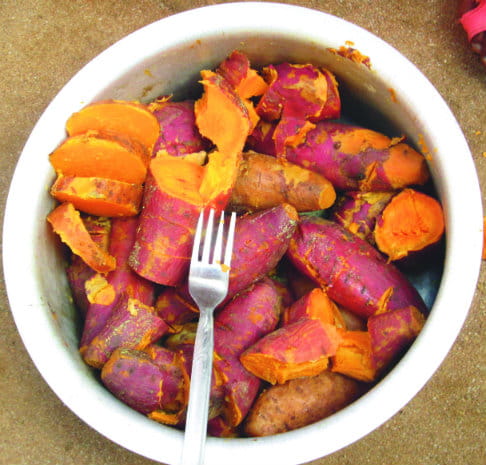 Sweet potato is rich in vitamin A. Photo: Petros Nyakunu

Joana Luis is a 55-year-old widow. She lives in Manica Province and looks after five grandchildren of school-going age. She is blessed to have a fertile field that is suited to sweet potato production. She discovered OFSP in 2012 and decided to dedicate half a hectare to growing it.

When asked how OFSP has impacted her life, she laughed and said, ‘I have harvested more than 1.5 tons so far. I sell fresh OFSP and the leaves of Delvia, Gloria and Lourdes varieties as a vegetable relish. I have used the money to build a house, connect water and electricity and buy furniture. I put some of the money into a savings scheme to enable me to borrow more easily. I am very satisfied with this crop and will continue to grow it for as long as I live.’

She shares her OFSP, giving some of her vines to others and encouraging them to grow the crop.

Where is vitamin A found?

Vitamin A is available from three sources:

The plastic mug in this recipe holds 500 millilitres.

Ideal for pregnant and breastfeeding women, children under 5 years of age and those who are ill – but tasty for everyone!

This resource is from Valuing food – Footsteps 94