‘Climate change’ is a term used to describe a large-scale, long-term change in the earth’s weather patterns or average temperatures. It happens partly because of natural causes, but also because of human activities.

We all have a role to play in tackling climate change

‘Climate change’ is a term used to describe a large-scale, long-term change in the earth’s weather patterns or average temperatures. It happens partly because of natural causes, but also because of human activities. In particular, average global temperatures have risen since countries first started to burn coal, oil and gas (known as fossil fuels) about 200 years ago. 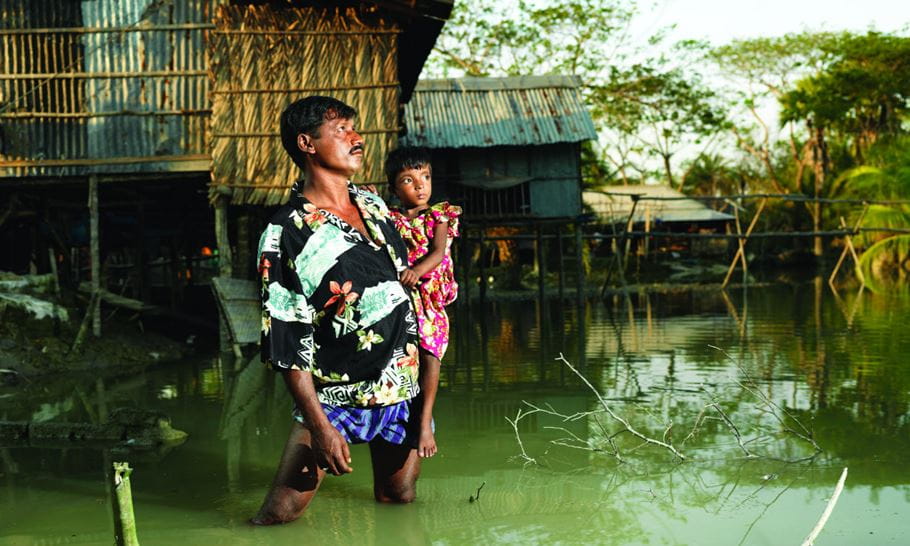 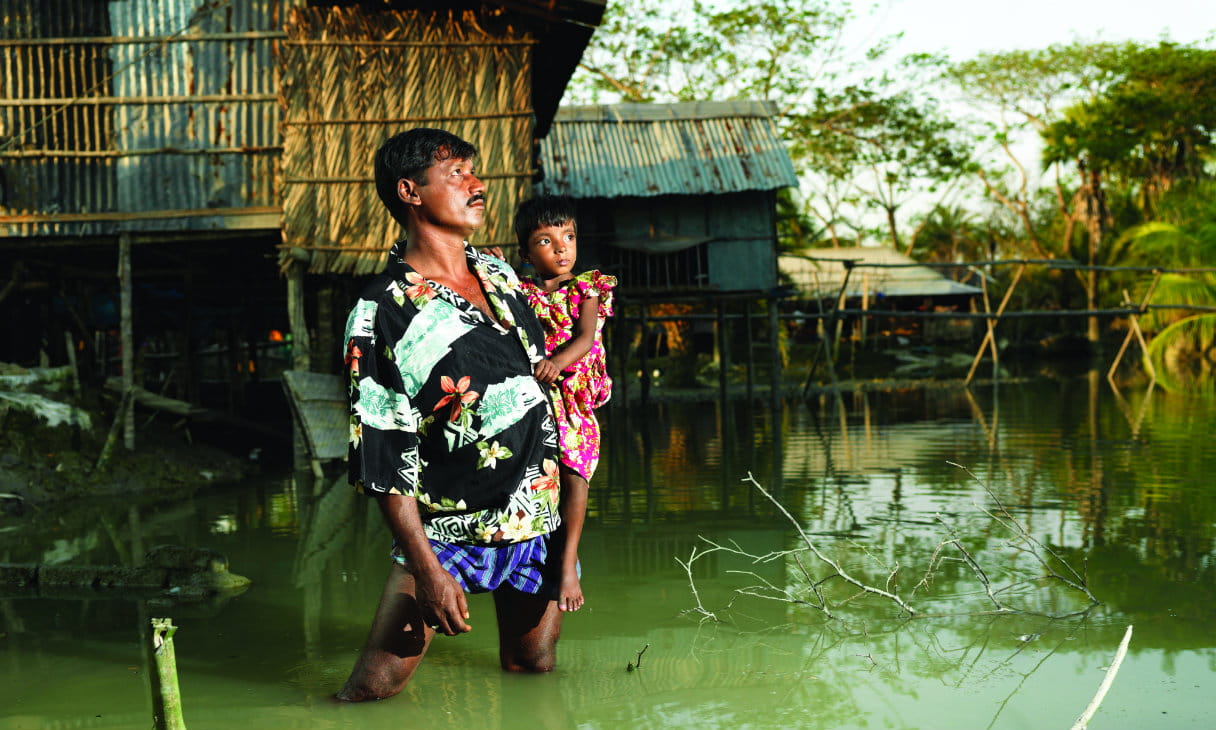 Rafiqsa Shikari and his family faced flooding after a cyclone in Bangladesh. Peter Caton/Tearfund

This was when the Industrial Revolution began, which used coal to drive machines. Industry spread around many parts of the world, based on the immense power that comes from burning fossil fuels. These fuels were formed from the decayed and fossilised remains of organic matter, such as forests, buried millions of years ago. Now we use fossil fuels for a huge number of purposes, including heating, lighting and transport. Oil is also used to make other useful products such as plastics, fabrics and fertilisers.

However, humankind is now feeling the impacts of a major side effect of burning these amazing energy resources. Fossil fuels release ‘greenhouse gases’, which include carbon dioxide, methane and nitrous oxide. These collect in the world’s atmosphere, making it absorb more heat from the sun. This changes normal weather patterns and seasons. Average temperatures will increase by several degrees by 2100 unless we dramatically reduce the amount of greenhouse gases in our atmosphere and begin to live more sustainably. In some parts of the world, the temperature rises may be higher. Scientists tell us that if the average global temperature rises by just 1.5 degrees (compared with levels before the Industrial Revolution), the consequences could be very serious for humankind.

Individual events in the weather can never be linked directly to climate change alone. However, rising temperatures will make existing weather patterns more intense. We are already experiencing some of these impacts, including the following:

We now realise that climate change is one of the biggest challenges facing the world today. It is already affecting food security and water resources. It is directly linked to an increase in the number of medium- scale disasters, especially in lower-income countries. Unfortunately, these impacts will continue to grow for many years to come, even if humankind takes serious action now. Climate change is a truly global issue. It means we have to change the way we plan for the future, and we must all change the way we live now.

And climate change is not the only problem. In recent decades, humankind has often exploited many natural resources (such as fish, minerals, water and forests) so much that supplies are no longer sustainable. We are causing massive pollution, destruction and degradation to the natural environment on which we all depend. The population is rising rapidly, and we are simply not living sustainably. At present we are using up the annual natural resources of 1.6 Planet Earths each year. But we only have one Earth…

All of these issues need to be tackled at the same time as addressing climate change. This will help to ensure that our future is secure and sustainable. The UN has produced a new set of 17 Sustainable Development Goals for the 15 years between 2015 and 2030. These goals will guide the efforts of governments, civil society and businesses to become more sustainable. 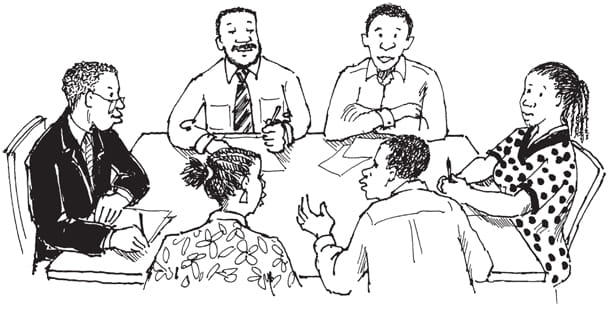 Churches, communities, NGOs and businesses can influence those in power to take action on climate change. Illustration: Petra Röhr‑Rouendaal, Where there is no artist (second edition)

Since the early 1990s, governments and civil society have been working together, through the UN, to try to tackle the causes of climate change at a global level. In recent years, they have also started to address the impacts of climate change, looking at how lower-income countries can adapt, and how to fund this adaptation.

Each year the UN hosts a Climate Summit to look for a global solution to climate change. These meetings bring together politicians, negotiators and scientists. A fair solution is challenging because it is an unequal problem. The countries that have contributed most to greenhouse gas emissions usually suffer least from the impacts of climate change. These countries are often unwilling to take action to cut their emissions. Countries hit hardest by climate change have often contributed very little to causing the problem, but need help to adapt. These countries tend to be less influential but can have a very powerful moral voice when they speak and act together.

The Paris Climate Summit took place in December 2015. It was particularly important because the existing agreement (known as the Kyoto Protocol) ran out in 2015. People had high expectations of the summit, and Christians were praying for a meaningful and fair global climate agreement. Thankfully, after two challenging and tense weeks of discussion and negotiation, the Paris Agreement was reached unanimously by 195 countries. This was a historic moment – the first time full global agreement to tackle climate change has been reached! Many countries and organisations would have liked stronger targets, but the Paris Agreement provides a positive starting point for global action.

What action can we take?

Learning about climate change and the pressures on the world’s resources can seem very challenging. But by coming together in our communities and organisations, we can all make a difference. You do not need to understand fully all the complex processes involved. You can simply write and tell politicians about the impact that climate change is having on your own situation. You may also be able to play a role in influencing ongoing global negotiations by getting to know those who negotiate for your own government and influencing them ahead of international meetings. Communities and churches can play an effective role in helping governments make good decisions about climate change. Many of Tearfund’s partners have achieved this and become trusted advisers to governments. As Christians we can share our concern for God’s precious creation by reflecting prayerfully on our surroundings, our lives and our use of resources.

Isabel Carter led Tearfund’s International Publications team until 2007. She is now a freelance writer and editor with a particular interest in climate change issues. For further reading: www.prayandfastfortheclimate.org.uk

Nepal at the UN Climate Summit
by Raju Pandit Chhetri

Nepal is a small, landlocked country in the Himalayas, rich in natural resources and wildlife. However, climate change has made it one of the most vulnerable countries in the world. Nearly 70 per cent of the population rely on agriculture. Farmers are the first to be hit by the impact of climate change. Flooding, landslides and droughts are happening more than ever before. There are also major changes to the pattern of the monsoon rains.

Nepal spent time preparing to raise its concerns in Paris at the UN Climate Summit in December 2015. Our major focus was to gain support to help us adapt to climate change. Another priority was addressing permanent damage to our country due to climate change. Nepal decided to ask richer countries for ambitious actions to reduce their carbon emissions. We aimed to play a constructive role as one of the 48 vulnerable and poor countries represented in Paris.

Raju Pandit Chhetri is Director of Prakriti Resources Centre, Kathmandu, Nepal. Raju previously worked for many years with one of Tearfund’s partners in Nepal.

Words used in this article

Emissions in this article refers to greenhouse gases that are released into the atmosphere.

Sustainable means that something can continue in the long term. Sustainable development means meeting today’s needs without damaging the ability of future generations to meet their needs.

This resource is from Climate change – Footsteps 99