Video can be used to explore issues, tell stories, express concerns and advocate for change

Participatory video is when a group or community work together to plan and create their own films. The process helps them to explore issues, tell stories, express concerns and advocate for change.

Here are some tips for community groups creating their own participatory videos.

Instead of videos, a series of photographs can also be used to tell a story or stimulate discussion about an issue. This may be an easier approach in some communities. 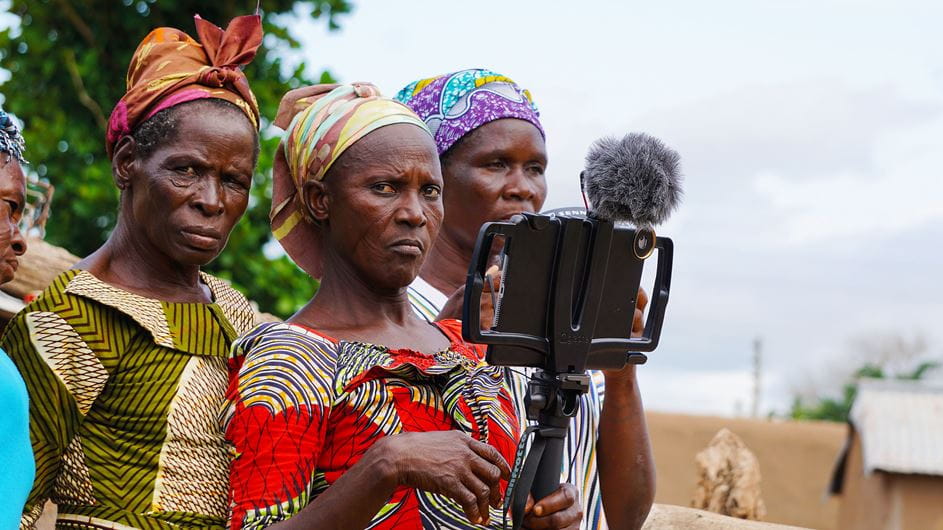 Women in Kulbia, Ghana, learn how to use a camera. Photo: Gareth Benest/InsightShare

Ten women from the small village of Kulbia in Ghana joined a participatory video process to explore and document the land issues affecting widows in their community.

There are an estimated 50,000 widows in the Upper East region of Ghana. Traditional practices vary, but the loss of land by women following the death of their husbands is consistent across communities.

The group from Kulbia was made up of women of different ages and experiences. All were illiterate and had never operated video equipment before. They learnt basic video skills through a series of games and exercises. And they worked together for several months to create a powerful video on corruption in the community and the resulting loss of land by those who are most vulnerable: widows.

Their short video ‘Pakorpa Susangho’ (Widow’s Cry) has been watched and discussed widely during community screenings and various national and international events. Community chiefs, civil society leaders and politicians from local and national government have attended the screenings, and many have made public promises to support widows and protect their land rights.

The widows in Kulbia have reported significant improvements in their relationships and their standing in the community. Other women have become more aware of the issues and have asked to be involved in discussions. Two community members have been inspired to train as legal assistants.

One participant said, ‘Our issues have only ever been whispered amongst ourselves, between widows. We could never have discussed our issues openly… let alone discuss them with the chief! Now our issues are being shared and we have sensed change in the air.’

Chris Lunch is the co-founder of InsightShare and leads the overall strategy, operations and financial management of the organisation.

Ulan Garba Matta is a Nigerian filmmaker, writer and storyteller.