Many of us have experienced the situation where we have a bill to pay, but we do not have enough money to pay it until we receive money owed to us

Practical advice on managing money at home and in small organisations

Many of us have experienced the situation where we have a bill to pay, but we do not have enough money to pay it until we receive money owed to us. As individuals, we can generally keep these details in our head, but this is not possible within a group or organisation.

This temporary lack of money is a common situation for groups or organisations. An organisation, if it is not careful, can find itself without any money when it has to pay a bill or wages to its staff. There are likely to be many more transactions for an organisation than for an individual and it is not so easy to remember what is happening. The organisation should therefore write a record of transactions.

One simple way that the leader or other member of an organisation can monitor money coming in and going out, is regularly to complete a cash flow forecast (sometimes called a cash budget). It shows when money will come in and go out, and highlights times when there may be a shortage. If this is known in advance, it is then possible to take steps to reduce the problem of not being able to pay bills or wages.

This example shows how to put together a simple cash flow forecast for six months for the Women’s Honey Producing Co-operative. (We use # to show their currency symbol.)

Step 1 Obtain the organisation’s budget, if there is one, or list all the items that will be received and paid out over the six months (12 months could also be used).

Step 2 Decide when each item will be received or paid. Some items (such as rent) may be paid for the whole year, in one payment. Other amounts, such as sales of honey, may be spread fairly evenly over the whole period. Be as realistic as you can.

Step 3 Write these items down, month by month, as shown below. Be sure to write the item in the month when you expect to receive or pay the amount, regardless of when it is due. Do not include any budget items that are not paid in cash or by a bank – for example, depreciation (loss in value over time).

Step 4 Add in the expected opening balance of cash and the estimated bank balance at the beginning of the period (in this example it is #2,340).

Step 5 Calculate the expected balance at the end of each month by taking the opening cash and bank balance plus the money coming in during that month less the money paid out during the month. 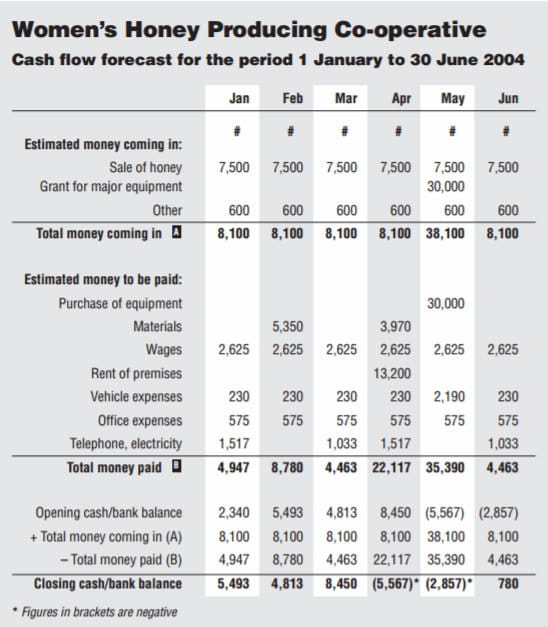 What does it mean?

This example from the Women’s Honey Producing Co-operative helps to identify clearly the months when they will be short of money. These will be April and May. It is important to know this, because a large payment for rent is due in April.

We can also see that the purchase of major equipment in May will have little effect on the Co-operative, as long as the grant is received in the month expected.

Overall there is enough money to pay all the amounts due. The problems are simply a matter of timing. Given this information, a number of actions could be taken by the group to help the situation:

A cash flow forecast enables the group to see in advance exactly when it will be short of money.

At the end of January, when the actual amounts are known, the new balance should be calculated, to replace the forecast cash/bank figure at the end of the month. The new cash and bank balances for the whole cash forecast can then be recalculated.

At the same time, the first month of the next period’s figures can be calculated – July, in this example. In this way, there is a ‘rolling forecast’ that is based on the most up-to-date information. The figures for the remaining months should also be updated as they become available.

If the group has access to a computer spreadsheet programme, the calculation process is much easier.

Don’t run out of money!

Cash flow forecasts are a straightforward way of managing your money. They help you know of a cash shortage in advance, before it becomes a major problem.

Glossary
Asset Any item that keeps its value is known as an asset. For NGOs, these are normally stocks of goods, office equipment, vehicles and property.
Bank statement A report produced by a bank, listing all the receipts and payments made into or out of a bank account.
Book-keeping The process of recording the basic details of each transaction.
Budget The best possible estimate of the future cost of activities over a given period of time, and of how those activities will be paid for.
Cash advance A sum of money entrusted to someone to use when precise costs are not known in advance.
Cashbook A book or spreadsheet that lists all of the transactions made into and out of a single account.
Reconciliation The process of comparing and checking information held in two sets of records that describe the same transactions.
Supporting documents The original documents that describe each transaction. They include receipts, invoices and authorising documents.
Transaction Any exchange of goods, services or money in return for other goods, services or money.

John Cammack is a freelance trainer and consultant in financial management, working with a range of non-governmental organisations. He has previously worked as head of international finance at Oxfam, Great Britain and as a senior lecturer at Oxford Brookes University. E-mail: john.cammack@ukonline.co.uk Web: www.johncammack.net

This resource is from Financial stewardship – Footsteps 57