The global rise in temperature is melting ice which is frozen within glaciers and ice caps. Large amounts of fresh water are released

From: Agriculture and climate change – Footsteps 70

How farmers across the world are adapting to climate change

The global rise in temperature is melting ice which is frozen within glaciers and ice caps. Large amounts of fresh water are released. This is causing a gradual rise in sea levels. Low-level coastal regions are therefore at more risk of flooding and tidal surges.

The remote Mosquitia region of Honduras, with its mangrove swamps, rivers, grasslands and tropical rainforest, is a beautiful natural wilderness. It is the home of Miskito, Garifuna, Pesch and Tawakha indigenous people. However, the area and its people are under threat.

The weather is changing as a result of climate change. Rainfall has become unpredictable – sometimes there will be droughts and at other times there will be very heavy rainfall. In 2005 the area was affected by three hurricanes and very heavy rains over a short period of time. These caused rivers to break through sandbanks and part of a community was washed away. Large areas of trees are also being cut down, changing the micro-climate and increasing erosion.

Many people live very close to the sea because the climate is much nicer there. There is a breeze and it is cooler. There are fewer insects. However, these people are very vulnerable to rising sea levels. If the area continues to be affected by more frequent and stronger hurricanes and the sea levels rise, then hundreds of people on the coastal strip will have to migrate. If they have to move into the forest areas, diseases such as malaria will become a big problem. They would then lose access to safe water supplies, schools and other community services.

Rising sea levels will also have a huge effect on the natural environment. Seawater surging into the coastal lagoons may kill the existing fish and plant life and lead to permanent changes in vegetation and fish stocks.

Tearfund partner MOPAWI is working with the communities helping them to plan for disasters and to replant trees around the lagoons. They make sure that hurricane alerts are given on the radio during the hurricane season. People are also taught evacuation procedures so that they can respond at short notice to the warnings. 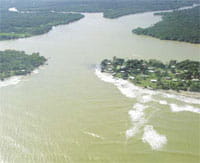 This resource is from Agriculture and climate change – Footsteps 70