Mumosho is a rural settlement, 22km from the town of Bukavu, in the east of the Democratic Republic of the Congo (DRC). During the last legislative and presidential elections in DRC, I was one of the independent witnesses in a polling station in Mumosho, in the Kabare constituency.

It was noted, after the count, that several ballot papers were null and void. This happened in three different ways:

All this meant that a large number of ballot papers were not able to be counted. This attracted our attention, and inspired us to find out the reasons behind these problems. We believed the main cause was the high rate of illiteracy among the voters in Mumosho.

We wanted to understand and to analyse the difficulties facing the voters, to find out if they were linked to education, and to find ways to improve the situation at the next ballot. To do this, we conducted a survey in Mumosho. It focused on the period from 30 July 2006 to 18 March 2007 and on individuals who had participated in the legislative and presidential elections. We took a random sample of 180 people of varying ages between 18 and 60. We used interviews, questionnaires and direct observation.

We found that the majority of the people questioned had a low level of formal education. This was more noticeable among the women than the men. Not one woman had reached higher education level. This can be explained by the fact that in the rural area of Kabare, women are traditionally the most marginalised people. They do not have much access to information and have little opportunity to gain skills. Their participation in decision-making is minimal, both at home and in the community.

Method of filling in ballot papers

People filled in the ballot papers either by pen or by finger print. Our survey results showed that 27.7% of people admitted that they had deposited blank ballot papers in the box. When we were independent witnesses in the polling station at the time of the count, we had noticed that the majority of the void ballot papers were those which had finger prints in inappropriate places. The very fact of filling in the ballot paper by means of a finger print suggests that the voter cannot write and consequently also cannot read. There is reason to believe that it is this same category of voters who deposited papers with several marks or none at all in the ballot box.

From these facts we confirmed that there was a close connection between the number of void ballot papers and the number of non-literate voters.

From our survey it is clear that the voters of the Mumosho settlement came up against two main problems during polling. Firstly, the vast majority could not read or write and therefore they had difficulty in filling in the ballot papers properly. Secondly, the voters had no experience of free, democratic and transparent elections, owing to the dictatorial regime which lasted more than 30 years in the country. 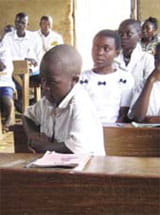 How can we overcome the problem of illiteracy in the Mumosho settlement and mitigate its negative impact on the next elections? We have tried to bring a simple solution to this problem, by setting up four literacy centres in Mumosho for women and teenage girls. Our survey showed that the majority of people who are non-literate in Mumosho are women. However, there is a saying that ‘to educate women is to educate the whole nation’. The objective of this project is to reduce the rate of illiteracy among the women and teenage girls of Mumosho before the organisation of the next legislative and presidential elections in 2011.

Literacy is the keystone of development. If rural people have the opportunity to read, write and do sums, then they can take charge of their own development.

This resource is from Sharing ideas – Footsteps 75