A pilot project in Zimbabwe

How to be accountable for our actions, and also hold other people to account

A pilot project in Zimbabwe 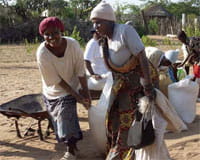 Tearfund works with a small organisation in Zimbabwe that works with local churches to provide care and support for orphans and vulnerable children. Due to serious food shortages they introduced a food aid programme for the most vulnerable families. This was carried out by local churches.

As part of Tearfund’s commitment to the Humanitarian Accountability Partnership (see page 5), the Zimbabwean organisation was approached to pilot a one-year project that focused on accountability at three sites within their feeding programme. The sites selected included both rural and urban areas.

Starting with a pilot project allows problems to be identified and addressed before the project is implemented across the whole programme of work. It also gives time for staff to fully understand the concept of accountability.

The organisation was keen to carry out this pilot project because accountability mechanisms ensure that people are treated with dignity and that the project has the correct focus.

An important part of the pilot project was the time spent at the end learning from the experience. This learning is being used to develop the project in order to improve accountability in the future. Some of the main challenges faced in implementing this pilot project included:

OPPOSITION FROM CHURCH LEADERS  At first, church leaders were suspicious of the organisation’s motivation for this project, and felt that they were not trusted. The Monitoring and Evaluation (M&E) Officer needed to invest considerable time with the pastors, answering questions and explaining the purpose of the pilot project. Support from one of the pastors who understood the benefits of the idea was invaluable. The M&E Officer started the conversations with pastors by offering an apology for not having been more transparent in the past. Most of the pastors now see the value of the accountability project because it takes account of the interests of the people they serve. However, changing attitudes takes time, and some churches remain unwilling to be involved.

THE ORGANISATION’S ROLE  As the organisation seeks to empower churches, community members see only the church as the provider of whatever assistance they receive. However, the accountability structure required the organisation’s staff to be more actively involved with the community in order to provide a neutral contact point for community members wishing to report on the distributions. An alternative could be to set up accountability committees to oversee the distributions and to provide a channel for feedback. Ideally these committees should include those receiving food, church members and representatives of the wider community.

POLITICAL AUTHORITIES  One of the accountability mechanisms was communicating information about the project to stakeholders. The information drew attention from authorities in the urban area, where they attempted to use the food distributions for political gain. In politically-sensitive areas it is important to consider carefully what information is shared. For example, it may not be appropriate to display budgetary information on a notice board. Ways could be found to target the information at those receiving food, such as only displaying posters while distribution is actually taking place and then taking them down.

INVOLVING CHILDREN  Children will often give very clear and honest information. However, in rural areas of Zimbabwe, children are taught that they should not question an adult. Therefore they were very reluctant to give feedback. As Zimbabwe has quite a high literacy rate, children were encouraged to write down their feedback and post it in the box. To get feedback from younger children, children’s groups were set up and led by teenagers.

FEEDBACK  In spite of high literacy rates, not all children or elderly people are able to write, and telephone lines in Zimbabwe do not always work and are not secure. Feedback is therefore often provided in person to the M&E Officer, but this means that it is not anonymous. When asking for feedback it is important to ensure that people who speak out are protected. It is also important to check the information received, particularly in politically-sensitive areas, as incorrect information may be given on purpose. Be clear and realistic about what aspects of the programme can and cannot be changed in response to feedback.

Results of the pilot project have so far been positive and the accountability mechanisms will soon be used in three other locations. Key benefits have included:

ENSURING GOOD PRACTICE  Publishing the criteria for selecting those who would receive food aid uncovered a number of abuses, including a pastor who was taking food for himself even though he did not fit the criteria. Community members pointed this out to the M&E Officer, who challenged the pastor directly. In the words of one of the other pastors from that area, the accountability project ‘benefits those who are supposed to be benefiting’.

Consultations with those receiving food in the urban area resulted in the distribution site being moved to a neutral location rather than using individual churches, to ensure that pastors were not using food to encourage church attendance.

The openness about selection criteria and ration quantities ensures that those receiving food now receive the right amount. Local co-ordinators report that they no longer have to answer so many questions, or face accusations of favouritism or stealing food.

EMPOWERING COMMUNITY MEMBERS  Volunteers, co-ordinators, community members and pastors all recognised that the pilot project restored the dignity of community members. A pastor explained: ‘They were made to feel like beggars before because they collected food from the pastor’s house. Now they own the project.’ The community members are now able to select distribution sites and manage the food distribution themselves. Many of the volunteers also appreciate this because it means they are no longer required to attend every distribution. The communities involved in this pilot project report that they have valued the opportunity to take control of their distributions, and to have a way to feed back complaints. One community member commented, ‘This system is very lovely. We were waiting for this moment.’

Accountability to communities in practice

The pilot project was developed using guidelines written by Tearfund for accountability to communities in its operational relief work. The guidelines were adapted to fit the Zimbabwean context. The Monitoring and Evaluation (M&E) Officer implemented the pilot project using the following methods:

1 Met with the church leaders and local co-ordinators to introduce and explain the idea of   accountability and to ensure their agreement and involvement. The pastors and coordinators then explained the project to the volunteers and community members, in the presence of the M&E Officer.

2 Developed posters containing information about the project in the local language, which were put up before each monthly food distribution. These informed communities about:

3 Encouraged the participation of everyone receiving food, including children.

4 Introduced a box for written feedback and complaints. This has been widely welcomed and used by communities.

5 Addressed any issues raised and provided regular feedback to the community members.

This resource is from Accountability – Footsteps 76