Considers the questions 'Who is a leader?' and 'What is good leadership?'

An innovator comes up with new ideas and puts them into practice to test them. Sometimes innovators are ridiculed because their new ideas seem crazy to other people, but most of us benefit every day from the discoveries made by innovators. Innovators are leaders in the field of ideas. Young people sometimes come up with the best innovations - perhaps because they have not become used to the already tried-and-tested ways of doing things.

Remya’s prototype design. This has since been developed by the National Innovation Foundation, India.

When Remya Jose was 14 years old, her mother fell ill. Her father was undergoing cancer treatment. She had to take three buses to get to school - a journey of two hours each way. As there was no washing machine at home, the chore of doing the laundry fell to her and her twin sister. So instead of just wishing for a washing machine, she decided to try her hand at making one during the vacations.

'Necessity is the mother of invention and that is what has happened in my case. The school is quite far so when I returned I used to be very tired. I didn't like washing clothes after coming back from school. I wanted to make something which could be used without electricity. So I had a close look at the functioning of electric washing machines and then created a model to do it manually.'

She drew the basic diagram and her father took it to a nearby car workshop. He requested the workers to make it and agreed to pay. He then purchased the materials according to his daughter's instructions and supplied them to the shop. It cost around 2,000 Rupees (US $45) to make.

Remya's washing machine consists of an aluminium box in which there is a horizontal cylinder made of steel mesh to hold the clothes and allow the water in. One part of the cylinder opens so the clothes can be put into it. The cylinder is mounted on a spindle and bearings, fixed to each side of the box, which allow the spindle to rotate. The spindle is connected to a pedalling system. Clothes are put in the cylinder, the box is filled with water to the level of the clothes, washing powder is added and the clothes are left to soak for at least 10 minutes. After pedalling for three to four minutes the clothes are clean. You can sit behind the machine and use your feet to turn both pedals, or you can stand or crouch at the side of the machine and turn one of the pedals using your hands. Both methods work. The cylinder rotates at a very high speed with the clothes inside, cleaning them thoroughly. After use the soapy water drains out through a tap, the barrel is refilled and the process repeated. When the clothes are rinsed and water drained, pedalling again leaves the clothes about 80% dry.


Remya developed her first design to include a bicycle seat. She attached the spindle to an external pedalling system like that on a regular bicycle. It is more comfortable to use but more expensive to build.

Maya Pedal, an NGO in Guatemala, is working on a pedal-powered washing machine. Other pedal-powered machines can be found on the website www.mayapedal.org/machines.html (English and Spanish only).

Some students from Massachusetts Institute of Technology worked with Maya Pedal on a prototype. The outer shell of the machine was made from an oil drum which was cut and then welded back together to make a shorter barrel. The motor was made from a bicycle frame without the wheels. The bicycle chain ran forward to a gear at the end of the washer drum's shaft. The inner drum was made of identical sections of moulded plastic bolted together. The advantage of plastic is that it is more durable than metal. However, it is usually easier to find metal locally than it is to find facilities to create moulded plastic. 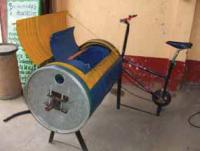 This resource is from Leadership – Footsteps 84