Faith Alive, a hospital based in Jos, Nigeria, has deliberately taken steps to involve men in its antenatal services 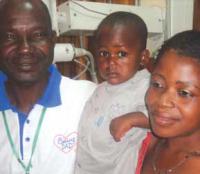 Faith Alive, a hospital based in Jos, Nigeria, has deliberately taken steps to involve men in its antenatal services, which include HIV testing for the prevention of parent-to-child transmission of HIV. When a woman attends the clinic, she is given an invitation card for her partner to come to the hospital for a routine discussion. There is no mention of HIV testing on the card. The hospital staff appreciate that many men will be taking time off work to attend the clinic so they are flexible in scheduling visits for men and give priority to men at the clinic.

Men are invited to come to group discussions. The group leader begins the discussion by welcoming participants, thanking them for coming and explaining the importance of a father’s role in antenatal care. The group leader asks for a male volunteer to demonstrate his knowledge of how to bath a baby or change a nappy. This is a great source of laughter and entertainment and allows participants to be involved in a fun and playful way.

The sessions end with teaching about HIV and the importance of testing to prevent passing HIV from parent to child. Men are offered HIV tests immediately without needing to make a separate appointment. Antiretrovirals (medicines used to treat the HIV virus) are given to those who need them.

Men proudly wear the T-shirts labelled ‘Caring Dad’ or ‘Loving Dad’ that they are given when they attend the clinic. These do not bear any mention of HIV or the hospital. This encourages men to follow through with their responsibilities as fathers and to tell other men about what they have learned in the group discussions.

Caroline Onwuezobe, who heads the men’s outreach at the antenatal clinic, states, ‘Men are treated like kings here, unlike other hospitals where it’s not the culture for men to come to antenatal clinics’.

Caroline interviewed one of the men who attended the clinic for antenatal appointments.

Why did you start accompanying your wife to antenatal appointments?

I was invited by the antenatal clinic. I thought it wise to follow her to antenatal clinic to have information about every issue myself so I could use it to save both mother and baby if necessary.

How many times have you accompanied your wife to appointments?

Six times including the day of birth.

Has anything changed for the better in your wife’s health since you started accompanying her?

Yes, her attitude to taking the medications given at the antenatal clinic improved – she was no longer reluctant to take them properly. She followed all the instructions given to her.

Was your wife’s experience of birth better because of going to the appointments?

Yes, there was every excitement, joy and encouragement in her, and even as she went in to give birth, she was supported.

Do you think men are more likely to accompany their wives to antenatal clinic now?

I think more men will accompany their partners to antenatal clinic now, seeing what I learnt when I went, and the way I was treated nicely. Most men are ignorant of the fact that fathers should be involved, which makes many reluctant, but as they get to become aware of it, I’m sure they will go.

Why have an HIV test in pregnancy?

This resource is from Maternal health – Footsteps 91