There are many ways of raising ducks. The simplest method requires little capital input, where ducks are raised in the farmyard as part of a mixed farm

Practical advice on all aspects of poultry-keeping, including nutrition, health and business development

Ducks, like other poultry, can be used for their meat and their eggs. There are many ways of raising ducks. The simplest method requires little capital input, where ducks are raised in the farmyard as part of a mixed farm.

In order to decide how to raise ducks, a farmer or extension worker needs to ask a number of questions:


Advantages of ducks compared with chickens:


Disadvantages of ducks compared with chickens:

This information has been adapted from Agrodok 33: Duck Keeping in the Tropics by S.J. van der Meulen, G. den Dikken, Agromisa Foundation, Wageningen, 2004. Find out more about this publication, including how to order or download it, on page 13.

Ducks can be used for their meat and their eggs. Photo: Layton Thompson/Tearfund

Chantha Im and Savorn Rath are married and have three daughters. They live in a village in Cambodia and used to raise ducks in a traditional way; releasing them during the day to go into the fields to look for food. But this method was full of problems: their ducks grew very slowly, often suffering from diseases and sometimes dying without the family knowing why. Members of the family often got ill themselves.

In 2009, a local NGO called the Wholistic Development Organization started a holistic community development project in the village. After attending a course, Mr Im started planting vegetables, feeding some to his family and some to the ducks. He also learnt how to improve the way he raised his ducks and chickens. He started putting a mosquito net over the hen house at night, began feeding his ducks three times a day with organic feed and vegetables left over from his kitchen and built houses for all his birds. After six months the family’s ducks had grown to two or three kilograms and they could sell them at a good price. With the money they got from selling the ducks, they were able to buy fertilizer for their rice paddy, a television, a mobile phone and other materials for use in the kitchen. The whole family benefited as his daughters were also able to finish high school. 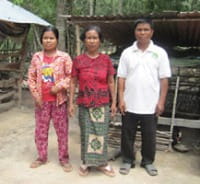 This resource is from Poultry-keeping – Footsteps 95