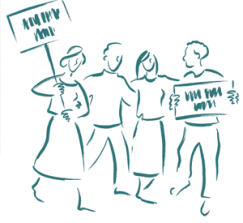 Many of the problems we address in advocacy work arise because of abuse of power. Usually, in trafficking situations, traffickers have gained power because they have used force, violence, bribery or coercion to get what they want. It is therefore very important that we understand who holds the power, both formally (who officially has the power) and informally (who actually has the power).

Power is the ability to influence the behaviour of people and the circumstances they live in. It determines who makes decisions, what decisions are made, when they are made, and how. When we speak out in advocacy, we interact with power because we are holding decision-makers to account for their use of power, trying to change the way power is used, challenging the abuse of power, and helping people to identify and use the power they have to influence change.

One way we can do this is through a power analysis – see table below.

Many governments have drafted legislation to protect the victims of trafficking, but these laws are frequently ignored and abused. This means that our advocacy work needs to involve all the groups who have a stake in the issue of trafficking in our context, so that we can involve them in appropriate ways. For example, government officials, the police and law enforcement agencies should be encouraged to fulfil their responsibilities to uphold the law, while families and communities at risk of trafficking need to be made aware of the potential for trafficking, and their entitlement to protection.

When we advocate on a topic like trafficking, we should be aware of the risks involved. People may experience different fears, particularly because of the corruption and entrenched interests which may be involved. This is understandable, especially in countries where law enforcement is weak, where civil society organisations do not have a strong voice and where government shows limited respect for human rights.

Taking some simple steps can help to lower the risks of advocating for change. For example, you can:

Who
Consider the relevant people, groups, organisations and institutions involved in advocacy:

Consider the types and forms of power that are applicable to advocacy:

Two million migrants from Myanmar live and work in northern Thailand. Many arrive with dreams of overcoming poverty, while some are forced to migrate due to conflict. All of them are easy prey for exploitation and discrimination, and many lack legal papers and are not aware of Thai employment laws.

One of Tearfund’s partners, MMF (Mekong Minority Foundation), integrated advocacy into its programmes to respond to the need, and decided to address all the main issues simultaneously.

They built relationships with the companies that were employing migrant workers, to help them improve working conditions. They worked with the local government departments responsible for legal paperwork to help the migrant workers register officially so they could claim their rights to basic services while in Thailand. They trained church and community leaders to identify people who may be at risk of exploitation and discrimination. They raised awareness among the migrant communities about Thai employment laws, and the requirements expected of migrant workers. They also cared for migrant children who were vulnerable to trafficking while their parents were working, by opening a day-care centre.

Trafficking children between Cambodia and Thailand is big business, even though there are laws in place to protect them. One Tearfund partner, determined to see the laws enforced, took some Cambodian government officials across the border into Thailand to witness the conditions in which trafficked children were living. They worked with communities and churches to raise awareness of the laws against trafficking.

They also encouraged the government officials, the border authorities and others to fulfil their responsibilities for upholding the law. Now, when children are at risk of being trafficked, many people know how to enforce the laws. Children themselves know how to get help. Trust has been built between the various officials who are meant to uphold the law. Breaches of the law are occurring less and less frequently.

Joanna Watson is Advocacy Adviser at Tearfund and is the author of the Advocacy toolkit (2nd edition).