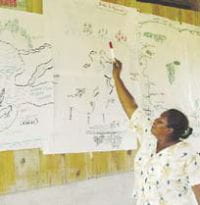 Thinking about the local area

For most of the activities/questions below, arrange the participants into small groups of five or six. You may decide to split the participants into groups of men, women and children as their answers will reveal a lot about their differences in perspective. After each activity ask the groups to present their ideas and allow plenty of time for general discussion.

What do we need to manage and protect?

Bring everyone together and ask: which of the natural resources present in the focus area are most important in terms of usefulness and the need for more careful management / conservation?

In groups of two, rank the listed resources in order of importance (eg if there are 10 natural resources in the list, a score of 10 should be given to the one thought the most important followed by 9, 8 etc so the least important is given a score of 1). Add all the scores together to produce a ranked list.

In the following example, mangroves, broadleaf forest and dune vegetation – and possibly manatee – would be chosen as things that need managing and protecting as a priority. These are called conservation objects.

What are the threats to the conservation objects?

Form small groups and ask each group to talk about one of the priority conservation objects. Ask them:

Avoid talking about the causes of the threats at this point, just focus on what is actually happening to the conservation object. For example, the threats to the broadleaf forest might be: forest clearance; removal of mature trees; reduced length of traditional fallow period.
Ask each group to prioritise up to three of the threats and write them on coloured pieces of card. These cards can then be stuck onto a large piece of paper, as shown opposite.

What causes the threats?

Write the answers on pieces of card and add them to the diagram, as shown opposite.

Who is responsible for the threats?

Write the answers on pieces of card and add them to the diagram, as shown opposite.

LOOKING AT BROADLEAF FOREST AS AN EXAMPLE OF THE PROCESS 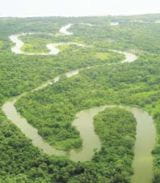 Development of a community action plan

Ask the groups to fill in the table below for their conservation object, using the ‘trees’ of coloured card they have developed.

Although this seems like a big task, by this stage the participants will have thought deeply about each aspect of the problem and will find it surprisingly easy to fill in the table. The strategies and activities should not only take into account the threats and causes of the threats, but also the people responsible, aiming to involve them in tackling the problem wherever possible. At this point, think about any previous initiatives in order to learn from their failures and build on their successes.

Now put together the tables developed for each conservation object. You will have a community action plan for the rational use and conservation of the most important (and/or most threatened) natural resources in the focus area.


BROADLEAF FOREST AS AN EXAMPLE


The six steps were adapted from an approach called ‘site conservation planning’ developed by The Nature Conservancy, www.nature.org

MOPAWI is a Christian NGO dedicated to the integrated human development and conservation of the Honduran Mosquitia.

Judith Collins was seconded by Tearfund to MOPAWI as an environmental advisor between 2000 and 2005. She is currently a freelance consultant and technical editor.

agroforestry  growing crops and trees together so both benefit

conservation object  a species, a group of species, an ecosystem or a habitat identified as needing conservation

ecosystem  communities of plants, animals and other living things, together with the non-living parts of the environment such as rocks and weather, which together form a working system

This resource is from Natural resources – Footsteps 82