Toxins in the food chain

Food safety is often a forgotten aspect of food security. Globally much effort has been placed on increasing the quantity of food rather than the safety of food.

Different ways to safely store and preserve food, making the most of the food we have and reducing waste

Food safety is often a forgotten aspect of food security. Globally much effort has been placed on increasing the quantity of food rather than the safety of food. But according to the Food and Agriculture Organization (FAO), 25 per cent of the world’s crops are affected by the problem of aflatoxin contamination. This is caused by a group of fungi (aspergillus genus) which, if eaten, can cause liver cancer, slow growth in children under five years old and a weakening of the immune system. The Centre for Disease Control estimates that every day more than 4.5 billion people are in danger of being affected by aflatoxins through eating foods which have the fungus growing on them. These include maize, sorghum, paprika and groundnuts.

Groundnuts (also known as peanuts) are a key crop among smallholder farmers in Malawi, who form about 85 per cent of the population. The nuts are a vital source of cash income and contain important vitamins and minerals that keep rural households healthy. However, groundnuts can suffer from aflatoxin contamination, either before or after harvest, especially when they are exposed to moisture and high temperatures. As well as being a risk to people’s health, aflatoxin contamination means farmers cannot sell their products abroad because they do not meet the standards needed for export.

Twin, a UK-based organisation, and the National Smallholder Farmers’ Association of Malawi (NASFAM) are training smallholder farmers to improve their groundnut production. They raise awareness of the risks of eating groundnuts affected by aflatoxins and train farmers to prevent the aspergillus fungus from growing and to recognise and remove any affected groundnuts before they go to market. 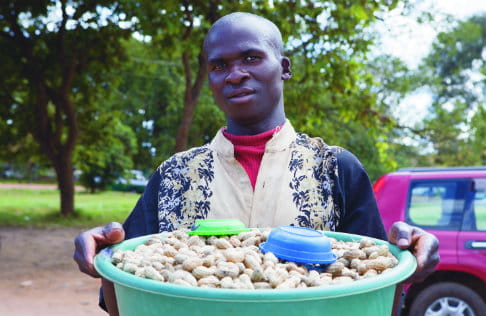 There are a number of ways to prevent aflatoxin contamination in groundnuts:

When shelling and storing:

When disposing of infected groundnuts:

You can dispose of affected groundnuts as you would other crop waste but it is very important that you follow this advice:

With thanks to Andrew Emmott, Senior Manager (Nuts), Twin and Twin Trading Limited for technical guidance.

Farm Radio International  Package 97  on growing groundnuts (www.farmradio.org/radio-resource-packs/package-97-growing-groundnuts) and  Package 98  on post-harvest groundnuts (to be published in 2014)

This resource is from Valuing food – Footsteps 94