Sustainable energy solutions can reduce both climate change and poverty

Since hydropower arrived in her village, Shanti has been able to expand her tailoring business by working after dark. She can also use an electric sewing machine and an electric iron. Photo: Kit Powney/Tearfund

However, despite significant progress, Sustainable Development Goal 7 – ‘Ensure access to affordable, reliable, sustainable and modern energy for all’ – is a long way from being achieved by the target year of 2030.

The latest figures from the United Nations show that 790 million people – about one in ten of the world’s population – are still living without electricity. Hundreds of millions more have a limited or unreliable supply.

In addition, almost half the world uses wood, charcoal or crop residues as cooking fuel. This results in the degradation of forests and health problems caused by smoke.

The World Health Organization estimates that smoke in homes causes up to 4 million premature deaths each year, largely from pneumonia in children but also from lung diseases in adults. Women and children are particularly at risk because they tend to spend more time in smoky kitchens than men.

Other potential side-effects of cooking with smoky fuels include low birth weights and vision loss due to cataracts. There are also risks of severe burns when cooking on an open fire.

Many people without electricity use candles and kerosene lamps for light. Kerosene can cause impaired lung function, asthma, cancer and increased susceptibility to infectious diseases such as tuberculosis. Other kerosene hazards include poisoning, fire and explosions.

In many countries the energy situation is improving rapidly as technology improves and the cost of renewable energy decreases. But in sub-Saharan Africa and parts of Asia, progress is much slower, particularly in remote, rural areas. While some governments have ambitious plans to connect everyone to energy grids, small-scale, off-grid solutions are likely to be quicker to implement, more cost-effective and more sustainable for many rural communities.

About 80 per cent of the world’s energy is currently supplied from fossil fuels such as oil, natural gas and coal. As well as creating pollution which is damaging to health, the burning of fossil fuels is the largest global source of carbon dioxide, a major driver of climate change.

Climate change is already pushing many vulnerable communities further into poverty as the seasons become more unpredictable and floods, storms and periods of drought become more severe. Continued use of fossil fuels will make this worse.

To reduce global emissions of carbon dioxide and other harmful gases it is essential that we shift our energy systems away from fossil fuels towards renewable sources of energy such as hydropower, solar power, wind power and biogas.

However, ‘renewable’ does not necessarily mean ‘sustainable’. Badly planned, non-inclusive renewable energy projects can have severe social and environmental impacts. For example, the construction of some large hydroelectric dams has caused excessive environmental damage and the displacement of communities. 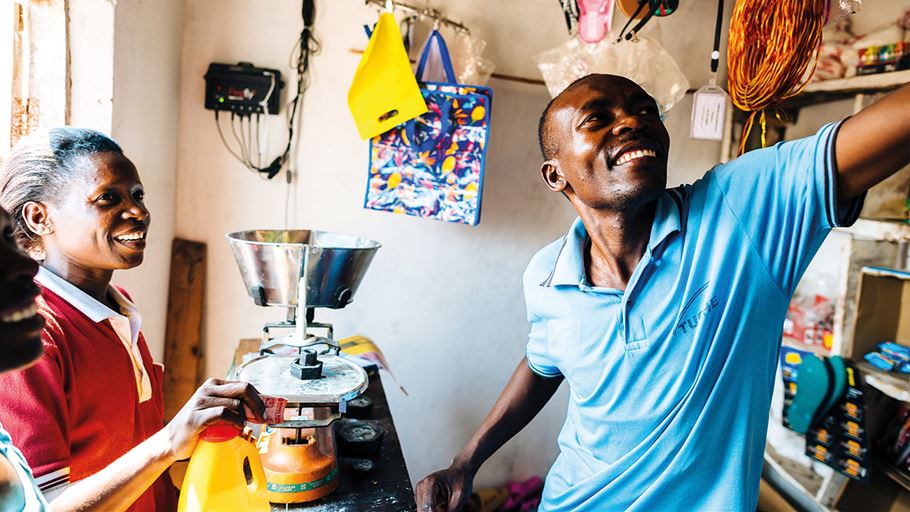 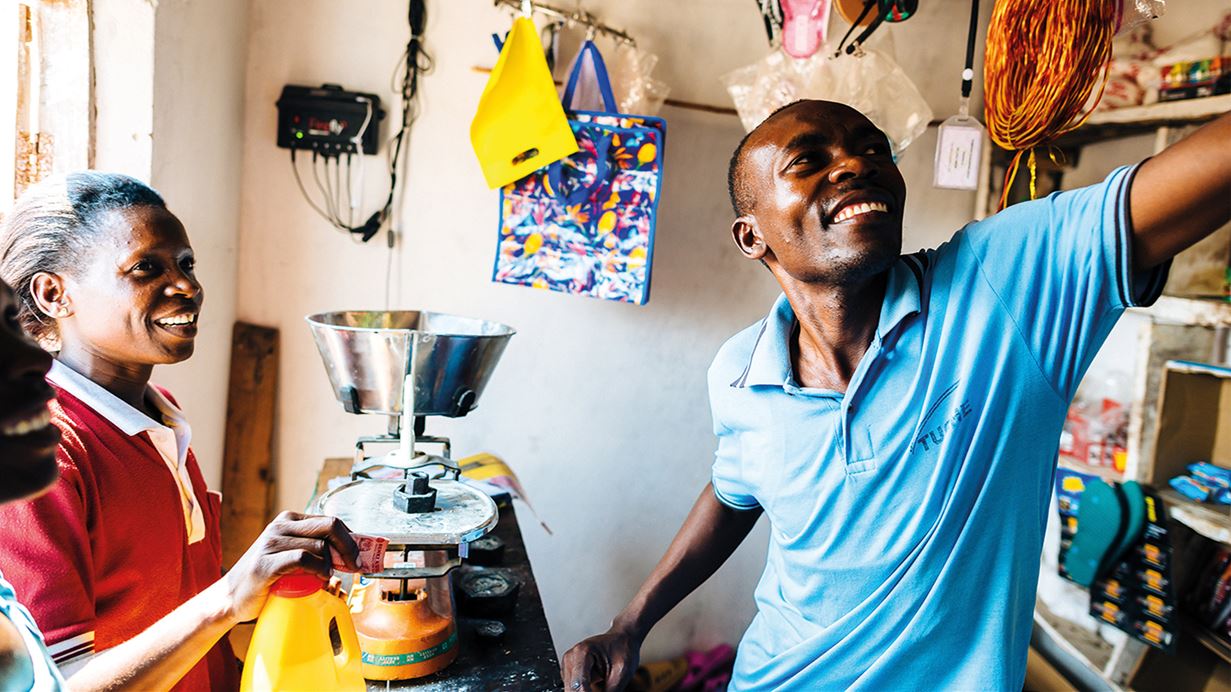 Lucas in Tanzania can now keep his shop open after dark because of the solar panel and light that he was able to buy using a low-interest loan from his self-help group. Photo: Tom Price – Ecce Opus/Tearfund

Renewable energy solutions provide an opportunity to tackle both climate change and poverty. In many areas they are already becoming the cheapest long-term options, opening up new business opportunities and reducing reliance on diesel generators, firewood, disposable batteries, candles and kerosene.

However, it is important that these solutions do not cause inequality in communities, or make existing inequalities worse.

For example, if only the wealthier families in a community can afford a solar power system, the other families will not have the same opportunities to study, work and socialise in the evenings, leaving them increasingly at a disadvantage. Likewise, if the needs and aspirations of women are overlooked, they may find themselves working longer hours than before in order to complete additional domestic and income-generation tasks.

The most successful sustainable energy initiatives make it a priority to listen to people’s views and encourage the full participation of everyone. In this way, empowering and inclusive energy solutions can be found which lead to many new opportunities, and healthier and more resilient communities.

A large-scale, long-term change in the earth’s weather patterns or average temperatures due to a combination of natural causes and human activities.

Naturally occurring gases form a layer around the earth that traps heat and keeps the planet warm. These are called greenhouse gases.

In the mid-1800s humans began to burn fossil fuels. This produces energy, but it also releases greenhouse gases such as carbon dioxide, methane and nitrous oxide. There are now more of these gases in the atmosphere than there should be, and too much heat is being trapped. This is causing the planet to heat up, resulting in environmental damage and more unpredictable weather, eg storms, heavy rain and periods of drought.

Fuels such as coal, oil and natural gas, formed from the fossilised, buried remains of plants and animals that lived millions of years ago. Fossil fuels are non-renewable sources of energy because they will run out one day and cannot be replaced. They produce large quantities of carbon dioxide and other greenhouse gases when burnt, contributing to climate change.

Energy generated in power stations and transported around a region or country using a network of electricity cables or gas pipes.

Energy from sources that are constantly replenished and do not run out. This includes solar, wind and hydropower. It also includes biogas: a fuel produced by the breakdown of organic matter such as food scraps and animal waste. Firewood is renewable if new trees are planted to replace the ones that have been cut down.

Equipment that supplies power by means of photo-voltaic solar panels that absorb sunlight and convert it into electricity. The system may include a battery to store the electricity and an inverter to convert it into a usable form.

Meeting today’s needs without compromising the ability of future generations to meet their own needs.

A set of 17 goals to end poverty, fight inequality and injustice and tackle climate change by 2030. The goals were adopted by most nations of the world at the UN Summit for Sustainable Development in 2015.

Powering past oil and gas

This briefing paper, published by CAFOD, Tearfund and Christian Aid, examines the relationship between oil, gas and poverty, as well as the key things that need to be considered when transitioning to low‑carbon development.

This report, published by the Overseas Development Institute and Tearfund, examines the challenge of how to bring power to more than 1 billion people who live without electricity.

This guide discusses how projects, organisational practices and lifestyles can be made more environmentally sustainable. Contact us to order paper copies in English, French, Portuguese or Spanish.

Mike Clifford is an Associate Professor in the Faculty of Engineering at the University of Nottingham, UK. His research interests include appropriate and sustainable technologies, particularly cookstoves for use in low- and middle-income countries.

This resource is from Sustainable energy – Footsteps 114