A self-help group that brings a culture of saving money to a group who never believed they could save, or knew how to

Making the most of what we have, sharing it and increasing it 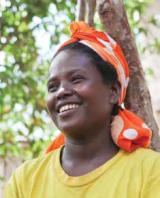 Adenach Woshebo, 27, began by saving 3 birr per week. ‘I never knew that I could become rich,’ she says with a smile. She has since borrowed over 700 birr (US $37), which she has used to expand her sugar cane business. ‘I am able to feed myself and my family of four without borrowing.’ Photo: Louise Thomas/Tearfund

‘You will never make it’ are the words that 30-year-old Zenebech Tesfaye recalls hearing when she joined the Yenegefire (Tomorrow’s Fruit) self-help group and planned to save 1 birr (US $0.05) per week. ‘They laughed, they teased and made all sorts of funny comments, but I decided not to listen to them and instead continue saving.’

The group has since increased their savings to 7 birr per week. ‘All those who were laughing at my 1 birr saving per month are now begging to join the group, especially after seeing how far the group has brought me,’ she says.

Zenebech sells potato chips at a restaurant near her home. ‘Through this business, I have been able to pay my children’s school fees, feed them and make sure that they are well dressed.’ She has even increased her savings from 7 birr to 10 birr per week (about US $2.50 per month). ‘I have learnt that the key to change is in my hands, and I will never look back.’

The Editor asked Mulugeta Dejenu, who has been involved in setting up self-help groups in Ethiopia for twelve years, to answer some questions about how they have transformed people’s lives in Ethiopia.

What makes your self-help groups successful?

Self-help groups are formed from people who have a similar social status and face similar challenges in life, such as isolation and limited access to information and resources (financial and knowledge). In Ethiopia, women are affected by these challenges more than men as they often have a limited say in decision-making and no access to household resources.

Those seeking to set up self-help groups find out who the poorest people are in a community by doing a wealth-ranking exercise, which includes speaking to key leaders and the community as a whole. These people are then invited to a meeting where self-help groups are explained and they are invited to join a group. Few want to join at first, and those who are willing usually do so with a sense of hopelessness, fear and a lack of confidence.

However, their similar social status and their shared experience provide a common ground for self-help group members to build relationships quickly. This brings a strong bond and trust among them and commits them to a shared purpose and determination to overcome poverty together.

With good relationships come trust and vulnerability, which allow them to share the deepest secrets they have. Members living with HIV have made themselves known and have been treated as friends. Muslims and Christians have become friends. Ethnic groups who have been isolated were received warmly by self-help group members. For many members the group proved to be an environment of healing because of the acceptance and love offered.

The self-help groups as people’s organisations are democratic. For poor women and men it is a very rare opportunity to exercise democracy and experience what using their authority means in practice. They write their own constitution (code of conduct) democratically and members approve it. Self-help group members elect their own leaders or representatives. Each member has to build leadership and communication skills by chairing weekly meetings. This prevents one person from dominating and gives equal opportunity and responsibility for each member to grow and develop as a leader. This brings personal transformation as new skills are developed and nurtured.

All members are encouraged to participate during weekly meetings. There is a great sense of belonging and ownership in self-help groups because the decision-making power rests on members as a group.

The experience of saving

The self-help group approach brings a culture of saving to people who have never saved before, nor believed that the poor can save. In order to save, each self-help group member has to cut down unnecessary expenditure and all wastefulness, including the misuse of time. The initial weekly savings are achieved not by making money but by cutting down unnecessary expenditure – for example, by reducing coffee consumption from three times a day to once a day (coffee is the main social drink in Ethiopia).

Self-help groups encourage savings before providing loans to members to help them understand the value of money and so that they experience the pain of sacrificial saving. Once they experience the difficulties of saving, it becomes easier for them to understand the value of loans and the importance of repaying them in the right time with a great sense of responsibility. Institutions that start lending money first have found it difficult to recover it.

Mobilising their own resources

Self-help group loans are drawn from members’ weekly savings that have accumulated for six to twelve months. Self-help groups mobilise their own savings and do not take loans from outside the group for at least a year. Group loans help keep members out of the clutches of unforgiving local money lenders.

Members apply for a loan using an application form that states what the loan will be used for, how long the loan will be taken for, and the repayment period. Applications are considered by the group and decisions are made by voting. Interest earned on the loans is put back into the group’s capital and made available for further borrowing. In Ethiopia we find that about 98% of loans are repaid and the few who are unable to repay have valid reasons such as death, divorce and bankruptcy. The ability to save and make loans brings a great sense of independence, dignity and self-confidence among self-help group members. Where there is a deep-seated culture of dependency on external support, self-help groups bring freedom through self-discipline and mutual support.

What are the benefits of having no outside support except the encouragement of the facilitator?

Many self-help group members take the initiative to support their fellow members on the job through providing encouragement and advice. Members’ business successes are often shared during meetings and as they walk home. A recent study comparing the costs and the benefits of the self-help group approach showed how beneficial the skill transfer has been between members for growth in income.

The first six months are the most difficult and during this time the facilitator’s role is very important. Facilitators help create the habits and behaviours that make the groups work. They help the group members to get to know and trust one another, and they help them to discipline themselves in the regular weekly savings.

The facilitator arranges training on savings and credit management, small business development, income-generation activities and leadership skills, with the emphasis always on self-discovery.

In time, self-help groups themselves can access skills, knowledge and resources from outside.

What are the dangers of handouts and loans coming from outside the community?

Handouts go against the most basic principle of self-help groups – to empower people. Self-help groups are meant to bring about a sense of dignity and independence through the hard work of members who mobilise their own resources. The principle of ‘helping people to fix their own problems rather than trying to fix problems for them’ is the basis for self-help groups to thrive as people’s organisations. Any effort to provide handouts will destroy their motivation to succeed by their own efforts. It eats away their creativity and ability to unlock their own potential. Groups that were given handouts by confused NGOs (non-governmental organisations) who did not understand the self-help group approach stopped meeting together.

What is the potential for self-help groups?

In five years members establish new businesses, often moving away from the marketplace to rent shops. In ten years, groups are aspiring to start joint businesses and set up banks and insurance companies. Some groups who have been established for ten years dream about putting self-help group members in parliament to address issues related to children’s and women’s basic rights.

More information about setting up self-help groups and savings groups can be found in the books Releasing potential and PILLARS – Credit and loans for small businesses.

This resource is from Mobilising local resources – Footsteps 93